You are here: / Vintage Modules / Preamps
Back to overview

Previous product Product 8 of 41 Next product 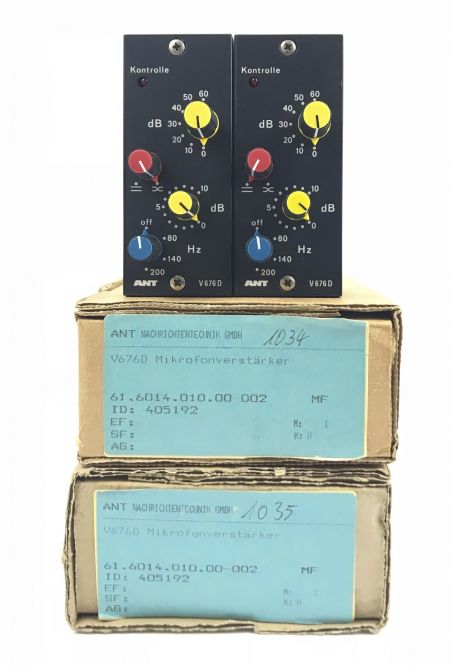 History:
The V676b mic preamp was designed by Telefunken in the 1960s and built by first Telefunken und later it´s successor ANT in the versions V676, V676a and V676b/c/d. The V676d is the last Telefunken designs before they closed down the pro audio and broadcast section of their buisness. When Telefunken stopped building broadcast equipment, ANT was founded to guarantee service for the Telefunken gear that was used in nearly all major studio facilities in the 1980s.  ANT also continued building some of the Telefunken designs plus designed their own very fine gear, before they had to close down in the early 1990s. In several treads we read about advantages and disadvantages of ANT vs. Telefunken or one V672x version against the other. As always, you can find tons of wrong information in the internet. ANT equipment was in no way inferior to Telefunken.

Design:
The ANT V676b is a discrete and transformer balanced mic preamp with 70dB of gain. As in other designs like the Neumann V476b or the Lawo V976/xx preamps you can control the volume with a stepped attenuator in 10dB steps and have an additional potentiometer for +|- 10dB fine trim. The design is completed by a 3-way low-cut filter and a phase-reverse switch. The cassette has no on-board switch for phantom power, so you must add and external switch for this when racking the module.

Sound:
Very open and transparent. Precise detection and not too much coloration. Good alround preamp with a superb audio quality.