This online shop is using cookies to give you the best shopping experience. Thereby for example the session information or language setting are stored on your computer. Without cookies the range of the online shop's functionality is limited. If you don't agree, please click here.

Since July 1, 2021, new sales tax regulations apply to web shops across the EU. Unfortunately, this change forces us to make some changes to our shop system. For customers outside the EU, net prices continue to apply. EU customers with a VAT ID number can also continue to make net purchases. All other customers based in the EU now have to pay the net plus the VAT rate applicable in your country. In order to make this safe from legal warnings, it was necessary to hide the prices until a customer is logged in. By registering and logging in, the sales tax applicable to the customer in his place of residence is automatically added. The delivery address is decisive for this. Thanks for understanding!

During the 1990´s analog audio equipment was displaced by digital gear. At the beginning of this process most people only focused on the advantages of digital, such as automation, total recall, non-destructive editing, etc. and only a few guys complained about the loss of sound quality the early digital systems brought with them. People should have known, cause all this happened before, when broadcasting stations and studios threw away or sold their old Neumann tube mics and Telefunken V76, V72 tube modules for cheap, as soon as the first solid state gear was available. Now, years later everyone is a little bit smarter and engineers all over the world remind of that great open and transparent sound that somehow got lost in the digital revolution. History repeated.

Vintage analog audio equipment such as mic preamps, equalizers, limiters and tube mics enjoy increasing popularity among audio engineers and users. Some of the gear is getting hard to find and prices are rising constantly, even though nowadays digital systems sound much better than the early ones.

Now, since a couple of years there´s a new topic in nearly all pro audio magazines and forums: Analog summing

What does analog summing mean?

In an analogue console the channel signals are mixed together at the group, aux or main stereo mix busses. This operation is simply performed by adding the instantaneous signal voltages together. When summing your tracks in a digital system such as your DAW, the same thing is achieved by adding corresponding sample values together. So far so good, but why do more and more people take the hard road and invest in a summing box, plus a bigger converter instead of simply pressing the „bounce button“ in their DAW? The answer is: SOUND.


So adding both, hi-end analog components and analog summing to your mix might give you that MOJO you were missing for so long.

With the Sonic Summarizer PRO, Vintagetools offers a summing amp based on refurbished, hi-quality vintage german broadcast modules. Four or even eight (PRO version) huge Haufe transformers and a strictly-no-compromise-design make the Sonic Summarizer PRO what we think is the best sounding summing amp available on the market today. We would like to invite you to listen and build your own opinion.

analog vs. digital | a simple calculation

Summing up the individual tracks of your production in the analog domain offers a number of great advantages compared to the simple "bounce-function" within your DAW. While a digital system rounds off all values for level, pan, eq-ing and compression, analog technique operates with an infinitely high resolution, causing no rounding errors or digital distortions.

Here´s a simple calculation: The amount of "sound events" in a digital stereo mix is equal to twice the sample rate. When working in 96kHz, you will hear 192.000 single events per second and side (left/right). Using a D/A converter with 32 outputs will result in 6.144.000 single events.

Our customers describe the benefit of analog summing with the Sonic Summarizer (PRO) by an improved detection of the individual acoustic sources, more transparency and more spacial depth.

Note: The positive effect of analog summing increases with a rising number of tracks!

Setup and function of the Sonic Summarizer is very easy. The idea behind it was to have a unit that once installed you won´t have to care about anymore. Plug it in and enjoy the sound. All adjustments like faderlevel, routing and pan are made in the DAW. Other than summing in the box you will have to route the signals not just to the stereo bus of your DAW, but to the individual outputs of your D/A converter. The Sonic Summarizer has 32 analog inputs, so depending on the amount of physical outputs on your D/A, you can route each signal in your mix individually or build groups in your DAW first.

Both Vintagetools summing amps have 32 balanced audio inputs and identical summing amp cards installed. So from the inputs to the summing outputs both versions are 100% identical. In other words, if you use the sum output of the PRO version without patching the singal back into the (second) vca amp, there is no difference. The PRO version adds a second analog amplifier with 4 additional Haufe transformers and a high quality remote fader. Thanks to the second card with more transformers and a second gain stage installed, the sound of the summarizer PRO changes when the output is captured post vca. Above all, the possibility to drive the input of the summing amp card higher while lowering the output of the vca, gives you the possibility to add nice saturation effects. The Sonic Summarizer PRO can go from crystal clear over decent harmonic distortion up to subtle analog clipping, hence it will always sound good to your ears.

We have customers who use the SSP in their mastering studios for stereo signals only just for this saturartion effect.

Since there are no hardware controls on the Sonic Summarizers, everything will be right as it was, when you opened the song last time. Nothing has to be recalled manually. From the stereo summing outputs you can either go back to your DAW via the A/D converters or go to an analog tape machine, monitoring controller, etc.

Studiosetup for the SONIC SUMMARIZER 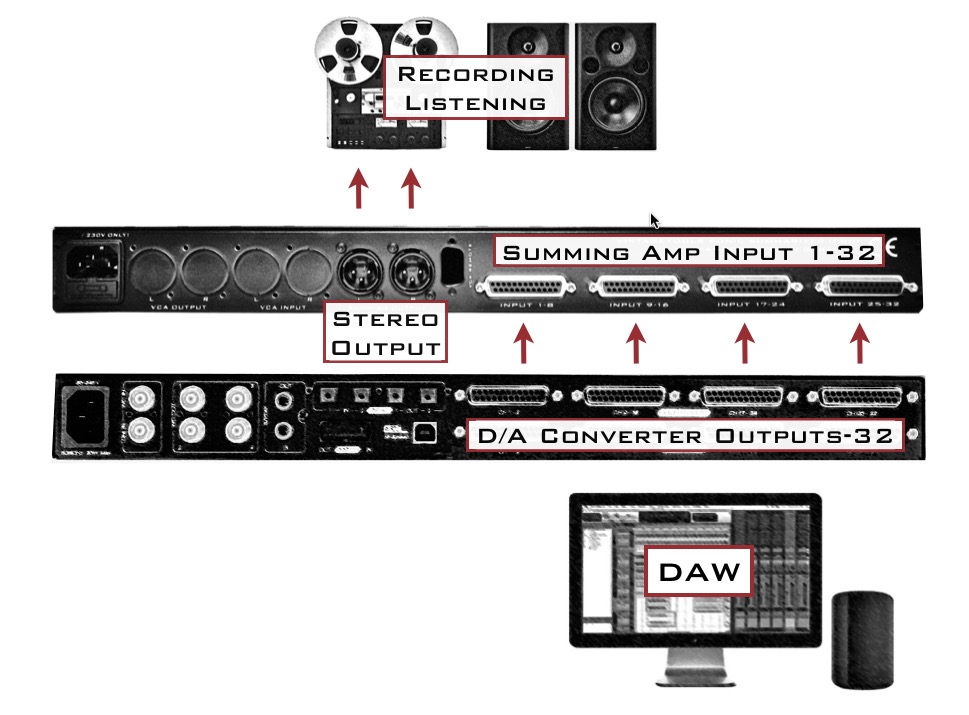 Studiosetup for the SONIC SUMMARIZER PRO 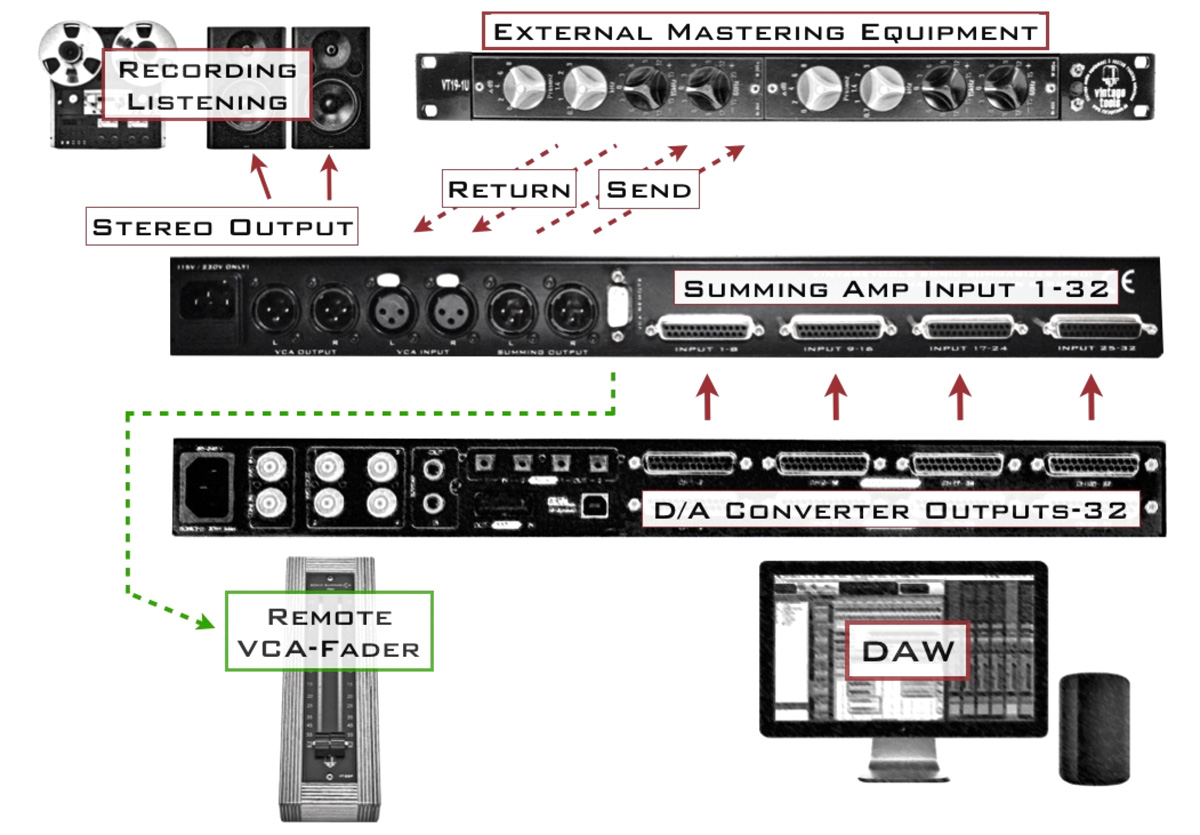 UPGRADES | INTEGRATING THE SONIC SUMMARIZERS IN YOUR STUDIO ENVIRONMENT

Many of todays younger engineers have never worked with large analog mixing desks such as the Neve V-Series or the SSL 4000. Also they might have never seen an analog multitrack tape machine in real life. For those an analog summing amp often is the first contact to the analog domain, when it comes to mixing their tracks. Be warned: Once you are infected it´s too late! :-) Some of our customers went from the Sonic Summarizers to large format analog mixers, others just add more and more hi-end analog gear and build their nice, completely modular production studios step by step.

At this point we want to show you some examples of how to upgrade a studio with a DAW and the Sonic Summarizers already installed. Theoretically, you could add faders, pan, auxes, eq´s, routing, limiters and mic preamps plus a master section and you´d have that nice sounding and comfortable, but also very expensive mixer again. Practically only few people can afford to do that. If you are interested in a custom solution for a small or large format console, tracker or mastering transfer desk, please don´t hesitate to ask us. We´d be glad to help you realize your individual dream console!

There are many good sounding converters on the market, but in conjunction with the Sonic Summarizers we often recommend the Antelope Audio Orion32 (HD Gen.3) . It has a great transperant sound, audio focused clocking and 32 I/O´s. I don´t know any other converter with that amount of I/O´s in that quality and with an equal value for money ratio. Also the Orion32 (HD Gen.3), like the Sonic Summarizer, has all it´s in- and outputs in the Tascam db25 format. Connecting two units has never been easier. As a result, for us the Antelope Orion32HD is the ideal partner for our Sonic Summarizers. Having a good converter with many DA outputs won´t only let you benefit from the better summing results (the more tracks summed > the better) but also offers you the door to integrate your outboard equipment in the setup.

Of cause our Summarizers work with all other D/A converters too. In case you D/A has no db25 connectors there are many adapters to Jack, RCA, XLR and Lemo available on the market.

add a patchbay as an upgrade

Customers who already have some outboard and those who are planning to add more gear have two possibilities. They can either decide to work with a fixed wire installation and do the routings in the DAW or they can invest in a much more flexible patchbay solution. We always recommend to use a high quality Lemo or tt-phone patchbay. This gives you a much better workflow and your studio can grow step by step.

The example below shows a simple, basic integration of a tt-phone patchbay. Rows A/B are half-normalized and C/D are de-normalized. With this configuration the D/A outputs feed the Summarizer inputs without the need to patch anything. As soon as you plug a cable in row B it´s connection to row a is cut (input break). Patching in row A does not cut the signal from B (output split). With this simple setup you can go from let´s say A1 into an outboard compressor (D1) and patch it´s output (C1) back into the summing amp (B1). If you are interessted in a custom configured patchbay for you summing mixer, send us an email.

We made the above patchbay for a customer who only wanted eight of the 32 A/D inputs to appear on his patchbay. He had eight A/D inputs wired fix to his preamps and knew he would never record more than 16 sources at the same time.

Note that the VCA in- and output of the Summarizer is patchable too. Since this is also the transformer balanced insert send/return of your mix bus, it´s easy to add mastering outboard equipment such as an eq or limiter. 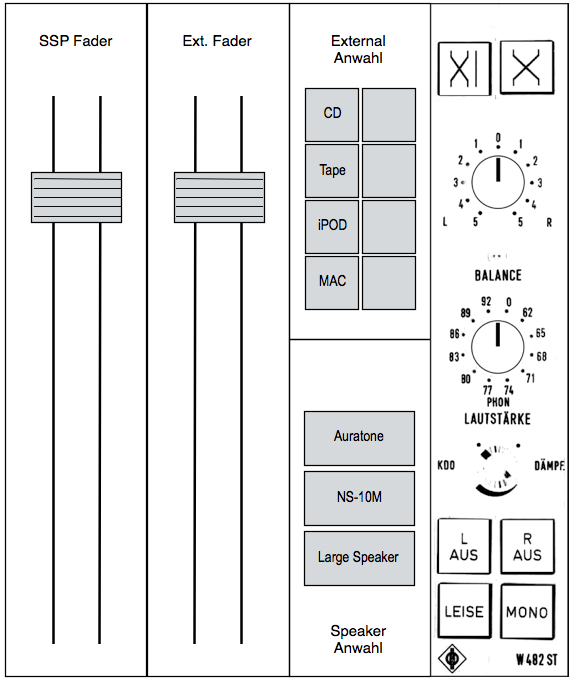 Let´s say you already have a good converter and own a Sonic Summarizer PRO. What happens to the audio signal after it left the Summarizers VCA output? What if you place a lousy monitoring controller in between the VCA out and your good sounding speakers? Well, if the MC is not too lousy, which I hope, you won´t be disappointed. Still, adding a high quality MC will let you hear the signal clearer. A cheap component, even a bad cable, in the signal flow is like a needle eye. It can degrade your monitoring signal.

Now don´t get to carried away with these thoughts or you will start to spend all your grannies rent on equipment!